I know what your thinking. You know who the best mom in the world is. I''m sure most of you would say your mom. Well, your wrong. I'm married to her. I know because of the sacrifices she makes everyday just to be a mom.

Everyday, before everyone else gets up she is up. She opens the blinds and curtains and lets in the sun. She has everyone's schedule in her head and is ready to make sure everyone is up and getting ready so that they can get to where they need to be. She gets everyone in order before she even gets ready herself. Her day revolves around the schedule of our children.

Everyday she goes to work. Her office is in our home but not once has she ever taking advantage of the opportunity to work in her pajamas. She's dressed for success even when no one will see her.  She manages our business. Taking calls all day handling customers demands and of course doing more scheduling. In between she finds more time to do accounting and all other aspects of running a business. 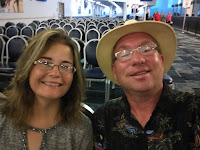 Everyday she has a routine for cleaning the house. I don't know what it is except for that laundry is on Thursday. She keeps our home looking beautiful. It's mostly thankless. The kids leave for school and work and come home and everything is clean. I think they believe a fairy came and dusted while they were gone. You would think they might question why the fairy skips their room.

Most days she cooks us supper. By now she is getting a little worn out, after all she has been going strong all day. We stuff our faces and she cleans up.

Evening rolls around and there might be time for a 11 mile bike ride or maybe there is some errands to run. There is also planning tomorrows meal and maybe a business meeting between us to get ready for the next day. She also spends time for things the kids need. Something for school, a ear to listen and a laugh or two.

Somewhere in the middle of all that she also finds time for me. A snuggle on the couch and conversations about our day.  I don't know how she does it. She doesn't nap and she will repeat it again tomorrow. My wife Lori, is truly the best mom out there. She sacrifices herself everyday for us and once a year we sing her some praises. That's not enough. I always loved the story "The Giving Tree". That tree gave and gave and when it thought it had nothing else to give... it still gave more. Lori gives everyday. When her head hits the pillow she feels like she has nothing else to give. But tomorrow she will get up, before everyone else, open the blinds and curtains and give some more.
Posted by Tim "Timo" Olson at 9:02 AM No comments: 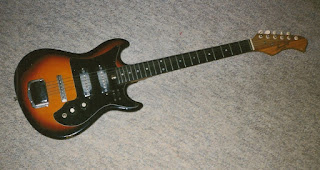 When I was a teenager I really really really wanted to learn to play guitar. I saved up my paper route money and bought a Harmony H-802 sunburst reissue. It came with a small plastic amp that ran on batteries. I knew nothing about playing guitar. I had played the tuba in the school band. (Insert your own jokes here) I also had a few months of piano lessons but I wanted to shred on the guitar. I bought a black and white checkerboard guitar strap, a beginner guitar book and was ready to jam. Only it never happened. I learned a few cords and would pick it up from time to time and say "This time I'm going to get with it and really learn to play" I eventually bought my second guitar. A black stratocaster copy made in Korea. I learned a bit more, bought a few distortion pedals and could rock out with my power cords to a few songs but never felt like a guitar player.

Over the years I bought a few other guitars. My wife even bought me a Gregg Bennett Samich acoustic guitar so I could practice more often without having to drag out the amp, cords and pedals. But I never really hit a level of guitar playing I felt confident in. 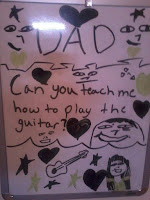 One day I can home to find a note on my daughters marker board addressed to me. She wrote Dad, will teach me to play guitar. I was excited to jump at the chance. Neither of her older brothers had any interest in playing a instrument or even much love for music as I did. I let her use my red Fender Squier Bullet and I used my black strat to show her a few cords. I let her keep the bullet in her room and I would hear her strumming away. What a advantage she had. This little thing called YouTube helped her learn a lot. Soon I was hearing recognizable songs coming from her room. 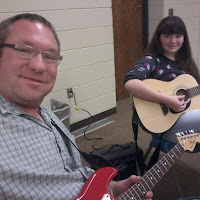 On a trip to Minneapolis we came across a First Act acoustic guitar for $25 in a thrift store. We picked it up, had it restrung and set up the best we could. She used that guitar to learn to play. She sat in her room, disciplined, working, playing. She was getting good.

Our church was offering a get together for those who were interested in learning the guitar. We thought this would be a great way to spend time together and learn some things. We would attend the class and strum along. Mostly playing cords we already knew but it was fun just hanging out playing guitar.

Soon she bought her own electric guitar and for Christmas I gave her a gig bag and a pink and black checker board guitar strap. I wanted her to look as cool as I thought I did back when I was her age. 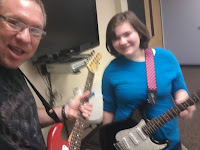 Recently we were invited to start sitting in with the worship team at our church and I started seeing just how good my daughter has become. In some areas she is better than I am. Now after trying to play guitar for over 30 years and to have a 16 year old show you a cord you do not know can really hit your ego. But that's ok. I taught her her first cords why shouldn't she help show me some.

The real high point in this came when we were invited to actually play with the worship team during a service. For me it was surreal. A musician I admire for his skill and abilities believed I was good enough to stand in front of people and play. After 30 years I finally felt like I achieved the goal I set out to reach so long ago. I so often spend my time telling others that you can achieve your goals and that they don't always happen on your time frame and here is some proof.

That first time I stood up there playing in worship was a confirmation in my abilities and my daughters. Her's was confirmed at age 16. Mine, 50. But the fact that we both were up there together, sharing that moment is a memory that we will both have forever and if I never played again, it would have all been worth it.