During the last election I had someone confront me about my support for a certain candidate. This exchange happened where all good debates happen, on social media. Now I have never announced who I was going to vote for in public. Never had, never will. I have also never announced my support for a certain political party. They just made a assumption.
Yes my political opinion may lean one way and I'm sure most can tell which way it leans. But unlike so many I do not support a certain party. Never have, never will. They are both corrupt and I would not allow my name to be associated with either one. This has allowed me to look at all sides and to make decisions separate from what one party may support.
Besides, I think it is unwise to get behind one party. Your thinking becomes monolithic and your thoughts are never challenged. You become locked into a prison of ideas. Never to explore other thoughts no matter how educated or open minded you may think you are. You are stuck supporting every idea like a sports fan supporting his favorite team. No matter how bad they play or even cheat you will support, cheer on and buy your team's merchandise. I also think the idolization of political figures like Trump and Ruth Bader Ginsburg is gross at best. They are our employees not superstars.
Since I do not identify with a team I have not allowed any team to help form my personality. You will not find a blue wave on my profile or a MAGA hat on my head. No bumper sticker or profile frame  I don't define who I am because of some party and their beliefs and I most definitely do not allow people who belong to an opposing viewpoint to define who I am and what I am not because of their beliefs. I am like David S. Pumpkins, I am my own thing.
When you become a fan of one party or "team" you are willing to support whomever they put in front of you. It is also why people were so quickly to jump to the conclusion that since I lean one way that I must support the candidate that leads that party. I can see why most would come to that conclusion. Because that is what they do. I do not. I will not sign my name to someone I do not believe in. I've even voted third party! Wild I know.
Another reason why I do not share publicly who I support is I do not believe random advise about who or what to support is extremely helpful. In fact its probably more harmful. Nobody should vote a certain way just because a friend or relative tells them they should. I know there are families who will print out the names of all the proper politicians and pass them around. No, I want people to choose who they vote for by forming a educated opinion. Not to just get the win and defeat the other "side".  Plus choosing sides also means you are creating a divide. If you have chosen a side YOU are contributing to the division. You have set up a winner and looser situation. I want us all to win.
Now this is where the problem comes in because I guess I'm weird for not just yelling "GO TEAM". I may just be a clown in the eyes of most but I'm smart enough to know that there are reasons why someone else might see the world differently than I do. Life experience, social status, economic status and many more reasons can come into play as to why someone may vote differently. (Although I believe usually it's the blindness of belonging to a team) Because of this I also don't see someone who may vote differently as evil like so many do. Remember when we used to love diversity of thought? I do and I am always willing to discuss what I know and also learn what others know. But sadly no one seems to want to be apart of that. No real discussion of ideas. Hear mine not yours. Just go for the win. "GO TEAM"
So if I won't dish out political advice I most certainly will not give out medical advice. I believe doing so is not only dangerous but very irresponsible unless of course you are a medical professional. Even if you are I don't think you should be randomly advising people on social media. But again so many people are willing to do just that. "Stop being selfish, get the jab!" I wonder how many people who yell about getting the vaccine would have claimed a year ago that your medical decisions should be up to the individual and their doctor. I wonder how many have moved so far they are okay with the mandates that prevent everyday citizens from participating in society. But today it is so common place to belittle someone about not getting "the shot" that I cannot read the comments on my favorite travel website without seeing someone being attacked over the vaccine. A place I used to go for light hearted conversations about destinations. 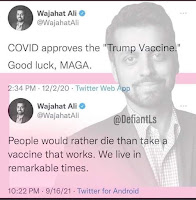 A great example of the dangers is when people jumped on the anti Hydroxychloroquine bandwagon because of their political beliefs. Not science. Well, they claim it's science but they get their science from political figures and not from the CDC website or researchers at the Henry Ford Health System who found the drug to be somewhat effective. So now the keyboard experts on social media keep handing out medical advice. I will bet that most cannot name a country where Hydroxychloroquine was available over the counter. I'll bet they didn't know it was a over the counter drug in many countries! They just saw their favorite politicians blocking it's use. Political figures stopped doctors from using a trusted readily available drug because of politics. A drug that although may not have been a cure seemed to help at least some patients. But hey, "SCIENCE."

Now we have people upset at the fact the there are those who are hesitant on getting the vaccine. I wonder why. Our politicians and media are the ones to blame. Both parties have claimed they would not trust a vaccine developed under the control of the other party. This includes the current president and vice president. (who are now trying to get people to take the very same vaccine) Go watch video clips from last year and see all the concern about a rushed vaccine. In researching for this blog post I watched the hosts of KTLA in Los Angeles talk about their concerns over a vaccine. (June 2020) We have the CDC lie to us from the beginning about mask use. Why, because they felt they needed to in order to get us to do what was needed. They didn't trust us. Now you have the CDC changing the definition of vaccine.  What the?! Then add the fact that according Pew Research only 20% of the population trusts the government to "do the right thing". No wonder people are afraid to get "the jab". They misinform us, lie to us, and if you even suggest you want to wait and do research, well. just ask Niciki Minaj.
Speaking of being hesitant against the vaccine, it is very high in the African american community. The fact is less African Americans have received the vaccine than whites, Asians and Hispanics. (as of Oct 2021) Why? Look up the Tuskegee experiments. We have also been telling them the whole system is racist for years and it was amplified 10 fold in the months leading up to the release of the vaccine. Now we ask them to trust the injection we want to put in them? I laugh when people make fun at others for being hesitant. 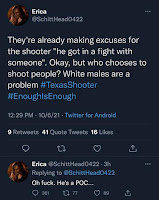 But we have all chosen a side and do not question anything. We just start yelling what "our side" is telling us to yell without thought. Well, most of you do. I sit back and laugh at how ridiculous you all look because you jump on every bandwagon. I know who is going to share the trending hashtag and pretend that they have been a champion for that cause all along and within the week never share about it again.
So how about this. Slow down. Learn some facts. Wait for more information to come out. Early reports are usually wrong. Wait until the trial. Don't join the witch hunt. Listen to the "other" side. Watch an alternative news source. Research before you post. Learn the subject well enough to educate others and learn how to defend your position without name calling. But most of all if nothing else, it is NOT your job to tell others how to live their life. Not even during a pandemic. Stop fighting with strangers and check in with the family on the couch next to you. Reach out to people you actually know. Support them and love them. As mother Teresa said, “The way you help heal the world is that you start with your own family.” But more than that, nobody asked for your opinion anyway.
Posted by Tim "Timo" Olson at 5:32 PM No comments: