Sometimes being a Dad sucks

So often you get on the internet and you find blogs about the joys of parenthood.  You read about all the joys of having kids and yes it's all true.  My kids give me more joy than I could have ever imagined.  Laying down my life for them in not even a question.  They have made me laugh harder than any comedian or movie ever has.  But at the same time they have brought tears to my eyes.  Yes at times they have done things that hurt me or disappointed me. Worse than that is when they hurt because life is hard and you cannot shield them from the pain.

Four years ago my wife Lori and I brought home the cutest puppy.  Our kids had been asking for a dog for a while and we would look at them from time to time.  It was a very hard decision for us as we don't have a lot of family to help us care for him.  We knew we were giving up weekend getaways that we regularly enjoyed.  We would have to make visits to friends and family short so we could get home to let him out.  But on that day we saw our little brown ball of fur and we knew we needed to bring him home.  We told all the kids to sit on the couch as we had a surprise.  He stayed quite and we placed him on the living room floor.  We told them to open their eyes and the look on their faces were priceless.  He ran over to them and tried to jump on the couch but it was too high.  We told them to pick him up and my oldest picked him up and started to cry.  Love at first sight is possible.  He tried to hide the tears and he did a good job but I saw them on the video replay.  He was so small, brown with one white paw.  I called him Buster brown on the way home and the name stuck.

Over the years Buster became such a huge part of our lives.  He was our shared love and joy.  He made us laugh when a lonely fart would sneak out and scare him.  We loved watching him as he would try to bury his rawhide bones in the couch.  He would entertain us when I would give him a empty 20 oz pop bottle that I would tightened the cap on making the bottle have no give.  He would try to pick it up only to have it shoot out of his mouth and across the floor.  He would chase it and do it again.  But most of all he loved us.  He would greet all of us at the door.  He would lick each and every one of us as we came into the house.  He always wanted to be close to us and his favorite was his "mama".  He loved my wife and spent most of his time curled up next to her.

My oldest son referred to him as his best friend.  So when Buster started to act a little strange we became concerned.  He acted like it hurt to pee.  We called the vet and they couldn't see him until the next day.  A bladder infection was what we thought as he started peeing in the house but soon he wasn't going at all.  We would take him out and he would try but nothing would happen.  About four in the morning he started crying and barking.  We tried to comfort him.  By seven Lori took him to the vet and he was making the worst sounds.  Moaning like a person.  We never would have thought that within eight hours he wouldn't be with us any longer.

At about 2 pm Lori called me at work and I came home fast.  The x-rays were in and the news wasn't good.  We had to act fast because he had a bladder stone in his urinary tract that was blocking his urine and if we didn't do something soon it would explode.  The vet had never seen such a big stone for such a small dog.  It was the size for a lab, not a 20 pound dog.  He could not give any guarantee that anything we did would help. 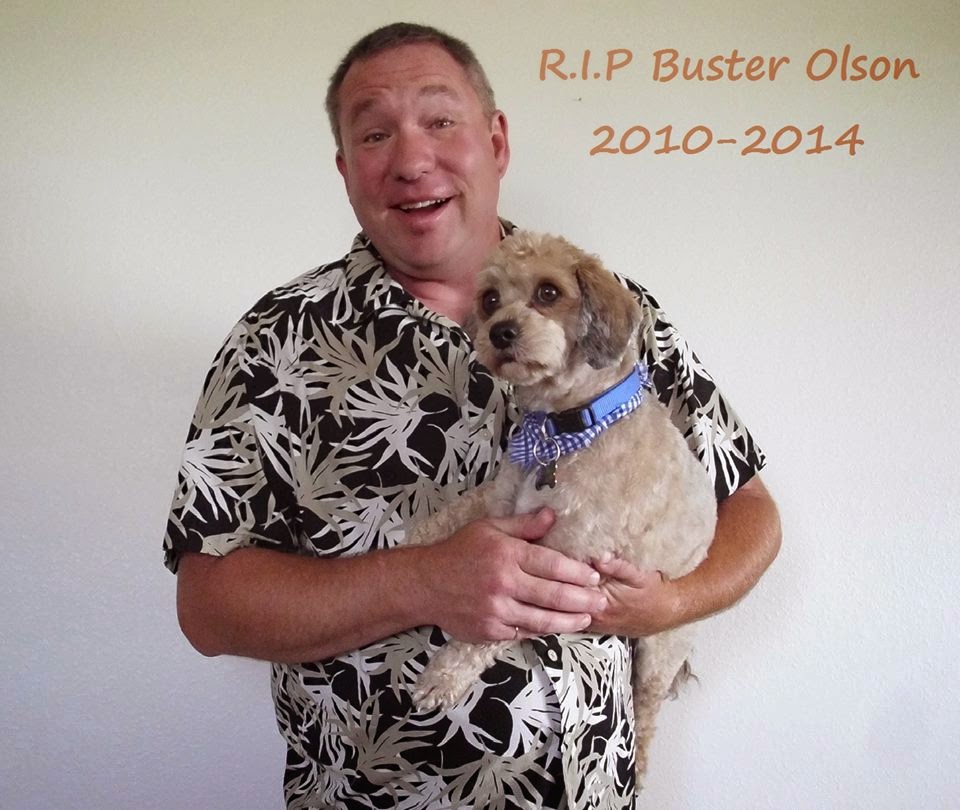 We sat the kids down and explained to them what was going on.  We could do all the things the vet said and try to save him or we could let him go.  Trying meant thousands of dollars with the slimmest chance it would work.  It was the hardest conversation we have ever had.  I just couldn't look at my kids, their eyes were so full of tears.  Wetting their shirts as they rolled off their faces.  Nobody would answer us.  So Lori and I told them that we think its best to let him go but that if any of them want to try to save him we will.  Finally my oldest spoke up and said three words I will never forget him saying.  "Put him down"  It had to be the hardest thing he ever did.  In saying that he knew his best friend was no longer going to be with us.

Lori and I looked at each other and she asked me to call the vet as tears filled her eyes.  I said OK.  We walked downstairs to my office and I told her that I didn't think I could say the words.  I knew that by calling I will be giving the orders to have our dog put down and to never return.  I knew that making that call would put into motion hurt for all of us.  I did not want to do it.  There are times you have to man up and take it for everyone else.  I told Lori that I will pay what ever it takes if  the result of what I was about to do meant that someone would hate me.  She said I love you and I know you would.  I walked back and forth crossing the floor gathering my thoughts and holding back the tears. I picked up the phone and dialed the number.

When I hung up the phone I broke into tears and told her we needed to go say goodbye.  We called the kids downstairs and we gathered for prayer.  I lead us in a prayer asking for Busters suffering to be over.  For us and our hurt.  Our broken hearts.  I hugged everyone and we gathered ourselves and drove in silence to the vet.

We arrived and they brought Buster out.  They had him in pain medication but the way he walked you could tell he was still in some pain.  They took us to a back room and left us to say good bye. Lori and the kids took time petting him.  He walked around confused and never licked any of us.  I stood watching my family have it's heart broken unable to do anything.  Their tears triggered mine. They all kept petting him and telling him how much they loved him.

I finally got down on the floor to say good bye.  I pet him for a second and then I put my head down on him and all the hurt that I was holding back opened up and I cried like I never have in front of everyone.  I was a slobbering baby.  My furry buddy was about to die and my wife and kid's hearts were being split in two.  My protection mode was going but there was not a thing I could do.  There was no way for me to prevent the events of the day.  My mind raced, I bargained, I pleaded, and I could do nothing.

Yes my children are wonderful.  They are the most special and important thing in my life.  I do understand that someday the wound will have healed.  I also understand that if used right this situation will make us stronger as individuals and as a family.  But my protective side hurts for now,  Having to make that call, having to tell my kids such hurtful news, and not being able to protect from the situation makes me realize that sometimes it sucks being a Dad.
Posted by Tim "Timo" Olson at 8:30 AM