Do Not Do Outrage

In the last few days I found myself reading a post where someone was outraged. I know I'm shocked! Another scam, another lie, however you want to look at it. It is really just another way to be outraged. Since I am a fact driven person I always believe if I just point out the actual facts using data and explain where it comes from the person posting would have to acknowledge that their statement wasn't completely true. I thought long and hard before posting because I am not interested in a fight. A debate would be okay, after all...facts, but I do not want to engage in any argument. My facts were brushed off so I followed with more. That was followed by a change of argument. I posted back that that was not relevant to the original complaint and that once again the facts stand. There was no reply so I let the conversation end there.

At lunch I received a notification that someone else posted on the conversation so I checked it out and guess what...all my comments have been deleted! Yes, my facts, provable mathematical facts had been deleted. I cannot venture to guess why my posts were removed as that would be judging. (Real judging is assigning a motive to a action without knowing what that motive is) But what did remain was more outrage. The comments that followed showed even more outrage as all the like thinking people enjoyed taking their usual positions.

I'm not telling you this so I can brag about my awesome factual points, although it was awesome. What caught my attention was that this person would rather be mad and outraged than even take into account the information I was providing. In fact in looking back, outrage is all I see. Social media posts have turned into nothing but angry posts about the latest outrage. What happened with the Covington School kids is a great example. I woke up and looked at my Facebook only to see everyone so outraged about these kids. (The things people called these kids was unbelievable) I looked at a few videos and within 10 minutes I knew there was more to the story and decided I needed to wait for more information before forming an opinion about it.

In 1979 "The Logical Song" was picked as Paul McCartney's favorite song and I think that a lot of it still rings true to this day. "When I was young, it seemed that life was so wonderful" sang Roger Hodgson. "But then they send me away to teach me how to be sensible, Logical, oh responsible, practical" He went on to sing about how they made him dependable. All very good things. But then it takes a turn. "I said, watch what you say or they'll be calling you a radical, Liberal, oh fanatical, criminal." Then worse yet, "Won't you sign up your name, we'd like to feel your acceptable, respectable, oh presentable, a vegetable!"

I think we have fallen into the later part of the song only we are the one's who want to make sure that your acceptable, respectable and presentable. We feel we need to right every wrong by posting about how WE believe this is a travesty. The sad part is we have not formed our own opinions. We have become Pavlov's dog jumping on every outrageous injustice. We somehow believe our yelling helps. But it only adds. It helps light fires you don't always see. Instead of being a positive light we throw fuel on the flames and if you don't agree, well then. your just not acceptable.

We signed our name to a team that makes us feel acceptable but we really are bunch of vegetables. We follow the orders and react without thought of our actions. You can't keep that up. You cannot react and scream about everything we see that is wrong. It would be a full time job and for so many it has turned into one. So many of the people I know on Facebook post more news articles and political memes than they do about their friends or family. Boy I wish I would see a huge burger post again! 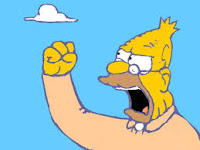 "The Logical Song" also has the lyrics, "But at night, when all the worlds asleep, The questions run so deep, For such a simple man. Won't you please tell me what I've learned, I know it sounds absurd, PLEASE TELL ME WHO I AM" I think we have lost who we are. So many of us have become Grandpa Simpson yelling and complaining about everything and we don't even see it. We don't even realize what we have become. We believe yelling wins an argument over debate. We believe only our answer is the answer. We scream about compassion while screaming shows none. We step on others while claiming to love all. All because we love the rush, the acceptance, and the superiority of the outrage.

Join me, and lets stop the outrage. Leave your team. Discover yourself. Get to know YOU! Break the chains and be a leader. So many are living in the dark, be a shinning light. Teach what you know and learn what you don't. Hold each other up. Listen more than you talk. Do these simple things and maybe just maybe you will notice "the birds in the tree's well they'd be singing so happily, oh, joyfully watching" you.